The scaphoid is one of the so-called carpal bones around the area of the wrist (fig.1). 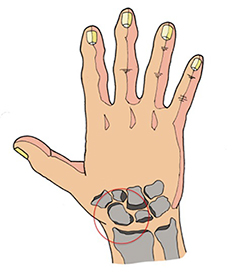 It is the most commonly fractured carpal bone because of its shape and position. A scaphoid fracture is generally caused by a fall on to an outstretched wrist, which means your palm is flat and stretched out and your wrist is bent backwards as you fall to the ground. Sometimes a direct blow to the palm of your hand can cause a scaphoid fracture. Occasionally, repeated 'stress' on the scaphoid can lead to a fracture. This can occur, for example, in gymnasts and shot putters.

Symptoms: symptoms may include pain at the level of the wrist and especially in some definite areas, such as the so-called  “snuffbox”, (a skin depression located at the dorsal base of the thumb) and on the volar region of the wrist; sometimes swelling can be present as well. In some people, symptoms may be milder leading sometimes to a non recognition of the fracture.

In case of clinical symptoms and negative X rays, some special views are needed (in ulnar deviation). If a scaphoid fracture is suspected by the clinical findings but not confirmed by the X-ray, an immobilization is suggested and further X-rays should be repeated after 10 to 14 days. If the instrumental evaluation is still not yet clear in the presence of positive clinical suspect, a CT scan or MRI should be performed. 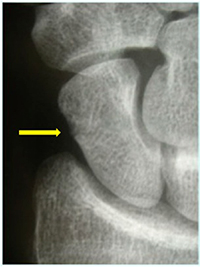 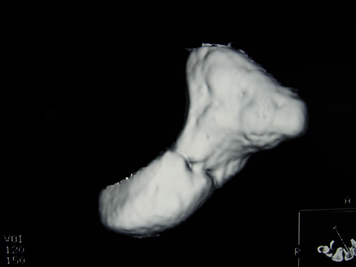 Treatment: If a non-displaced scaphoid fracture is confirmed, it can be usually treated by immobilization (nowadays made with thermoplastic materials) for about 4-8 weeks. In some cases, it may be needed for longer. If a scaphoid fracture is displaced, or in those conditions in which a faster return to the activity is requested (such as in athletes and musicians), surgery may be advised. A small screw is inserted into the scaphoid bone to hold the bone fragments together. This can often be done through a small incision in your skin allowing, most of the time, an immediate mobilization.

Complications: special reference has to be given to the scaphoid fracture regarding its complications, due to its shape, vascularity and wide cartilagineous surface.
The first one in cronological order, is the so-called delayed union: this conditions happens when it takes for the bone more than 4 months to heal. If it takes longer a fibrous tissues instead of bony one could form between the two fragments leading to the so called non union. This condition might need a surgical treatment with the use of bone graft harvested from another side of the body (most of the time the iliac crest). Further complication is the so-called avascular necrosis. The vascular supply of the scaphoid is not so rich and might leave part of the bone without its blood supply; the scaphoid will not be able to heal properly, leading a part of the scaphoid bone to die. The treatment depends on the involvement of the surronding bones and might lead to permanent functional deficit.